Over the last four weeks, the children in 5th Class have participated in the Explorers Marine Project 2016 which was sponsored and supported by the Marine Institute of Ireland, Sea-Life National Aquarium, Bray and the Blackrock Education Centre. This project was built around a 4 week visit to the classroom of a fully equipped 60 litre aquarium with four sea creatures from the Irish Sea. The aim of the project was to integrate the aquarium visit with the class curriculum, particularly in SESE, Literacy and Numeracy.

Our four sea creatures arrived in the classroom to great excitement on Wednesday, 10 February. They were adopted and named by the different groups of children in the class. Sparky (the starfish), Fwed (the flounder) and SpongeBob & Giuseppe (the ghost prawns) have become the focus of our attention every day.

Every day, the children have recorded air and water temperatures to ensure that our new friends were comfortable, with optimal water temperatures of around 15C. They have fed the creatures twice weekly, have cleaned the aquarium once a week and have written newsletter articles for Explorers’ Scéal on a weekly basis. The children were very concerned about Sparky for over a week as he wasn’t able to get to food before his companions gobbled it up-thankfully, all our sea creatures have thrived during their stay with us.

Over the last four weeks, the children have become experts on their sea creatures, googling them for information and recording their observations in a journal. They have studied the fishing industry in Ireland, have written underwater stories, have designed boats to carry passengers and have made bubble Art. We will all miss Sparky, Fwed, Giuseppe and SpongeBob when they return to the Irish Sea. 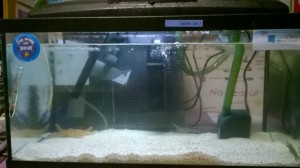 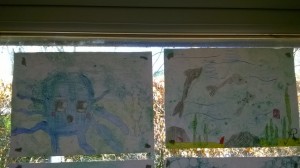 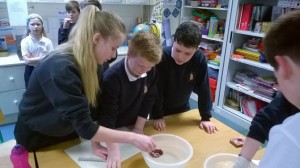