To commemorate the 1916 Rising, 5th and 6th class travelled to the Mermaid Theatre on Friday, 12 February to see a play entitled Me, Mollser. The play is part of the Abbey Theatre’s Priming the Canon series which introduces classic Irish plays to young audiences. The performance retold The Plough and the Stars by Seán O Casey through the eyes of its youngest character, Mollser. Curious and enthusiastic, she guided the children through her overcrowded Dublin tenement during the 1916 Rising.

The children from 5th Class, accompanied by Ger Cahill and Rita Barcoe, then visited Sea-Life in Bray in preparation for their participation in the Explorers Marine Project 2016. The children were introduced to a variety of sea creatures and were reminded about how to care for the sea creatures that had arrived in their classroom on Wednesday, 10 February. They engaged wonderfully with the visit and learned a lot from Eimear, the marine biologist who conducted the tour before enjoying hot chocolate and cookies outside Sea-Life. Our sincere thanks to Ger and Rita for a memorable day! 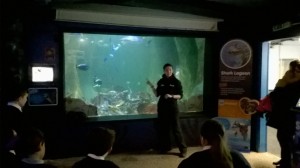